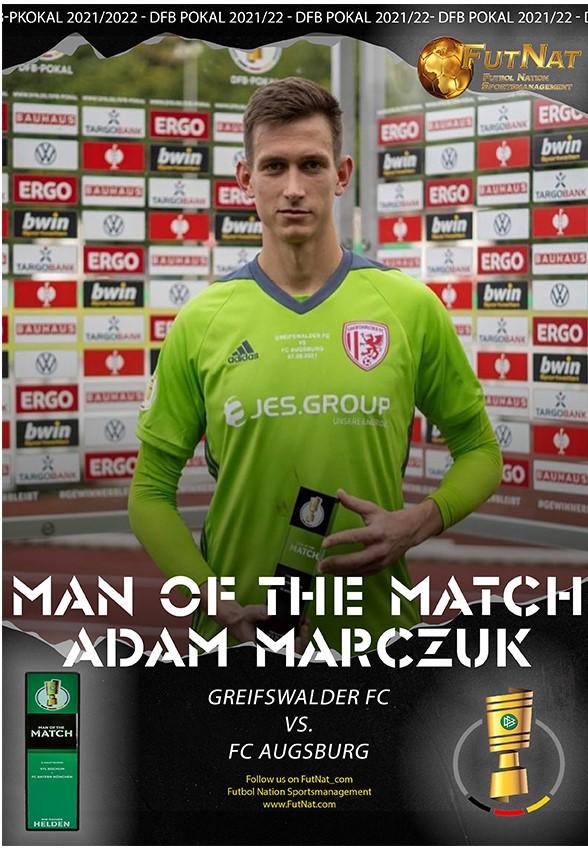 FC Augsburg barely escaped a cup glow at the Oberliga club Greifswalder FC and moved into the second round with great difficulty.

Greifswalder FC has made a dream start and went in the 3rd minute through a counter goal in the lead.

Rafal Gikiewicz, the goalkeeper from the 1.Bundesliga team FC Augsburg, waited on his opposite side already after 45 minutes. Gikiewicz congratulated his colleague Adam Marczuk to his up till the excellent performance. The goalkeeper of Greifswalder FC played a big part in the first half of the cup game. Gikiewicz, who had a quiet afternoon, acknowledged this.

FC Augsburg struggled for a long time. They were almost exclusively in possession of the ball, but they could hardly find any rooms. This was also due to the fact that they often played too slow and moved too little. However, the Icelandic striker of FC Augsburg lost several shoots to Greifswald’s goalkeeper Marczuk.

The goalkeeper of Greifswald FC, Adam Marczuk, was chosen for the “Man of the Match” and was able to keep his own box clean in front of the Augsburg players for a long time. Adam Marczuk played a major role in the team’s half-time score and the defeat was no more obvious.

However, the entire team of Greifswalder FC should be noted, which is in excellent shape and is aiming for promotion to the German Regionalliga this season.

Futball Nation Sportsmanagement congratulates Greifswald FC on the great game and we are very happy that the goalkeeper Adam Marczuk, who is advised by our agnecy, was able to show and underline his potential.

We wish Adam and the entire Greifswalder FC all the best for the upcoming season 2021/22 – a non-injuries season with the achievement of the targets set.